These journeys give you a great insight into the Buddhist heritage of Sri Lanka while worshiping the places hollowed by the Buddha. And also this journey takes you to ruined kingdoms of ancient Sri Lanka  and can explore the architectural legacy of those that remains today – entire townships with palaces, temples, monasteries, hospitals, ponds, and gardens – provides evidence of a sophisticated civilization which possessed advanced knowledge of science and technology, town planning and design, and valued the arts. The vast irrigational reservoirs built by the great kings are still a vital supply of water. 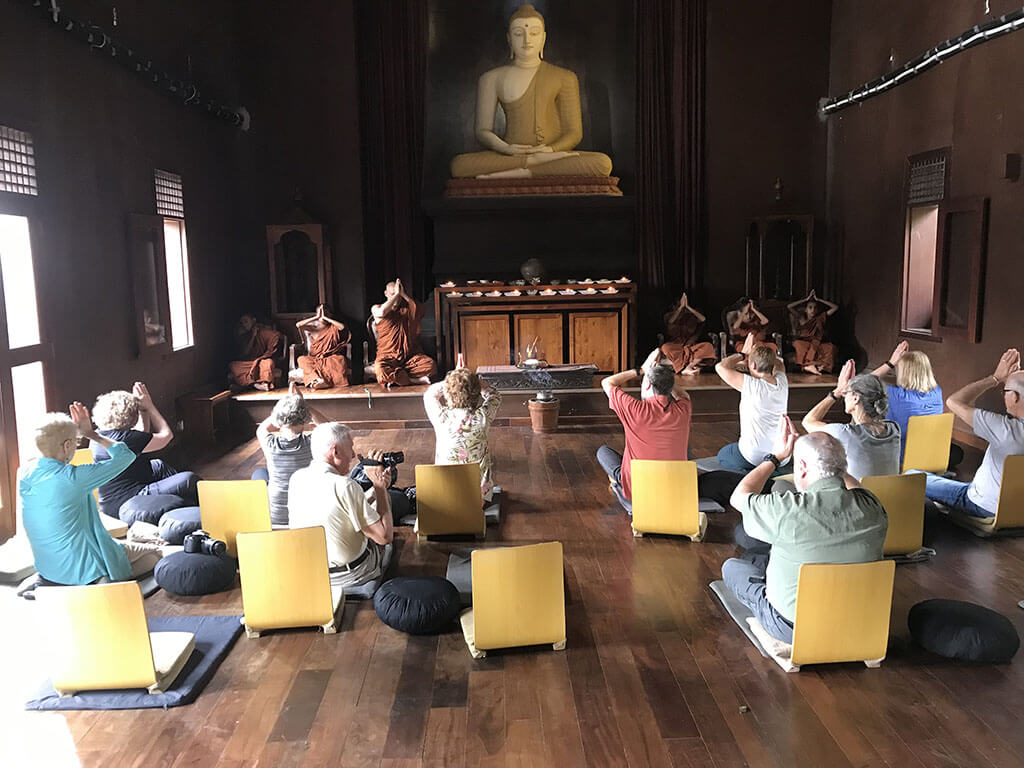 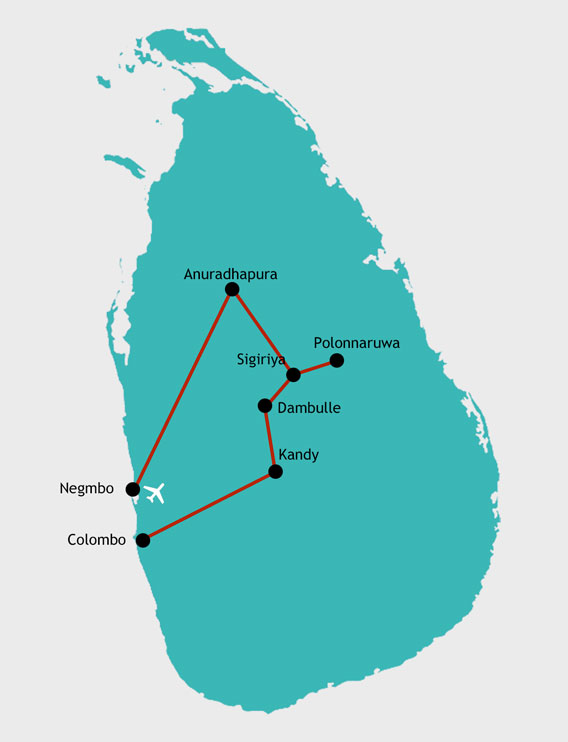 Dinner & Overnight stay at a Hotel in Anuradhapure

After breakfast visit ancient Anuradhapura City. Anuradhapura is an UNESCO World Heritage Site; Sri Lanka’s first capital, the greatest monastic city of the ancient world, dates back from the 4thc.BC to 11th c AD, ruled by more than 100 Sri Lankan kings. The World Heritage Site of Anuradhapura consists of a large number of sacred Buddhist sites including dagobas (gigantic dome-like structures), monasteries, palaces and the ancient Bo Tree, grown from the original tree in Budda Gaya under which Lord Buddha attained enlightenment. 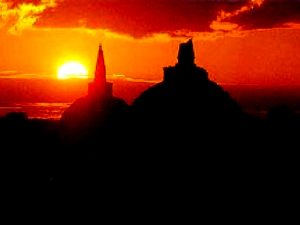 Evening visit Mihintale-The cradle of Buddhism of Sri Lanka. Just 13 kms away Mihintale, one of Sri Lanka’s most significant religious sites, where Buddhism originated on the island in 247 BC. Today it is very popular with Buddhist pilgrims and tourist, the complex consists of rocks caves, ponds and stupas. First monastery of Sri Lanka and the world’s first declared sanctuary; Mihintale’s ancient, spiritual ruins can leave you in awe 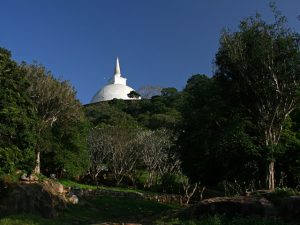 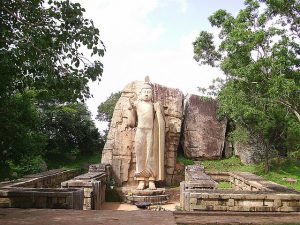 The Ritigala Buddhist Monastery nestles deep inside the Ritigala Strict Nature Reserve, is the partially excavated ruins of an extensive Buddhist Monastery, dates back 7th to 10th c AD. Walking around the beautiful ruins does certainly give you a feeling of adventures in search of mythical pasts; it is easy to imagine yourself as Indiana Jones whilst clambering 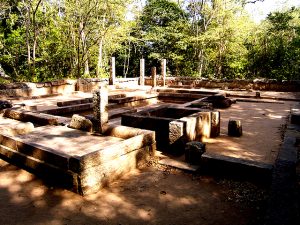 Dinner & overnight stay at a Hotel in Dambulle 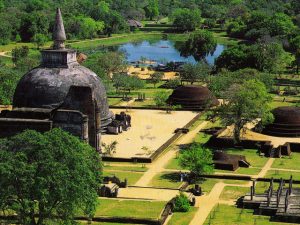 Next visit the ancient Aluvihara cave temple, which is of great significance in the history of Buddhism. It was here that the oral teachings of the Buddha, the Tripitaka, were committed to writing for the first time in 3rd century AD. The language of these Buddhist scriptures, Pali, influenced the development of the Sinhala language. The Alulvihara temple consists of large caves with Buddha images and frescoes. Further in is a cave dedicated to Venerable Buddhagosa, a Buddhist monk, who spent several years in this cave documenting the doctrines of the Buddha in Pali. 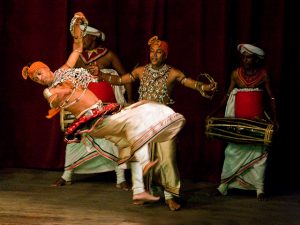 After breakfast leave for sightseeing in Kandy city-UNESCO World Heritage site, the capital of hill country, was the last seat of Sinhalese kings who ceded power to the British in1815 after many battle with the western colonial forces, still remains much of its old world charm and traditions of the Sri Lankan life style 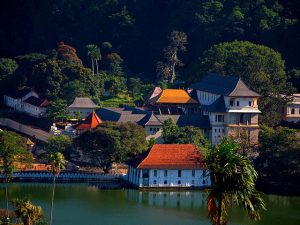 In the morning visit the sacred tooth relic temple of the Buddha. The temple, the most venerated place of Buddhist of Sri Lanka, was built in the 14th Century A.D. solely for the purpose of housing the tooth relic which was brought to the island in 4th c AD. The temple has decorative walls, a golden roof and fine woodwork. Religious services (pooja) with traditional music and drumming are held daily at dawn, mid-day and in the evening where guests can participate 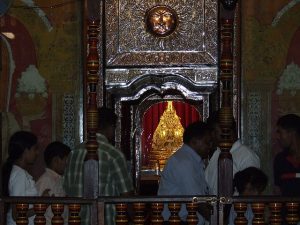 Evening meet a Sri Lankan Buddhist monk and learn about Therevade Buddhism practice in Sri Lanka. Here you‘ll be engaged with a short Meditation Program and a Dhamme discussion as well 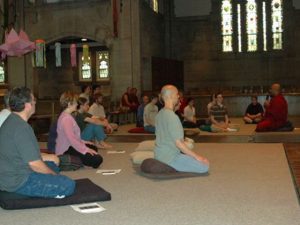 Dinner & overnight stay at the same Hotel in Kandy

After breakfast leave for Colombo, En route visit Keleniye Rajamaha Viharaye ; one of the most sacred worshipping places of the Buddhists of Sri Lanka since it is a site made hallowed by the visit of Lord Buddha. The Chronicles records that the original Dagoba at the temple, enshrined a gem-studded throne on which the Buddha sat and preached. This temple is also famous for its image of the reclining Buddha and paintings, which depict important events in the life of the Buddha and history of Buddhism in Sri Lanka. 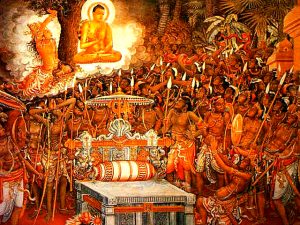 Afterward visit Colombo City before leave for departure. Colombo, The commercial capital of Sri Lanka, is a fascinating city with blend of East & West as well as a cozy mixture of past & present; the city is dotted with numerous interesting and important tourist attractions including colonial era buildings. The City Tour will include places of Tourist interest such as Colombo National Museum, Old parliament, Independent Square, Bandaranaike Memorial International Conference Hall, Buddhist, Hindu Temples and Town Hall. 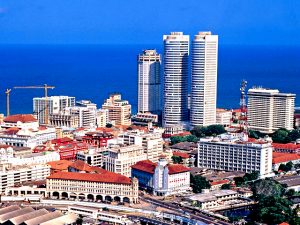 Evening leave for Air Port at Ktunayake (according to your flight time) for the departure. 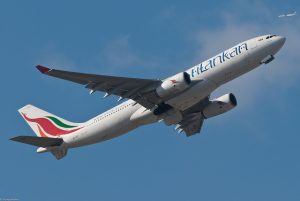